The household utensils of the ancient kitchens

All the culinary culture that our ancient ancestors had developed was accompanied by a range of cooking utensils, so that they could cook their food as best and most comfortably as possible. Here are some of the most basic utensils and a little bit of their history. 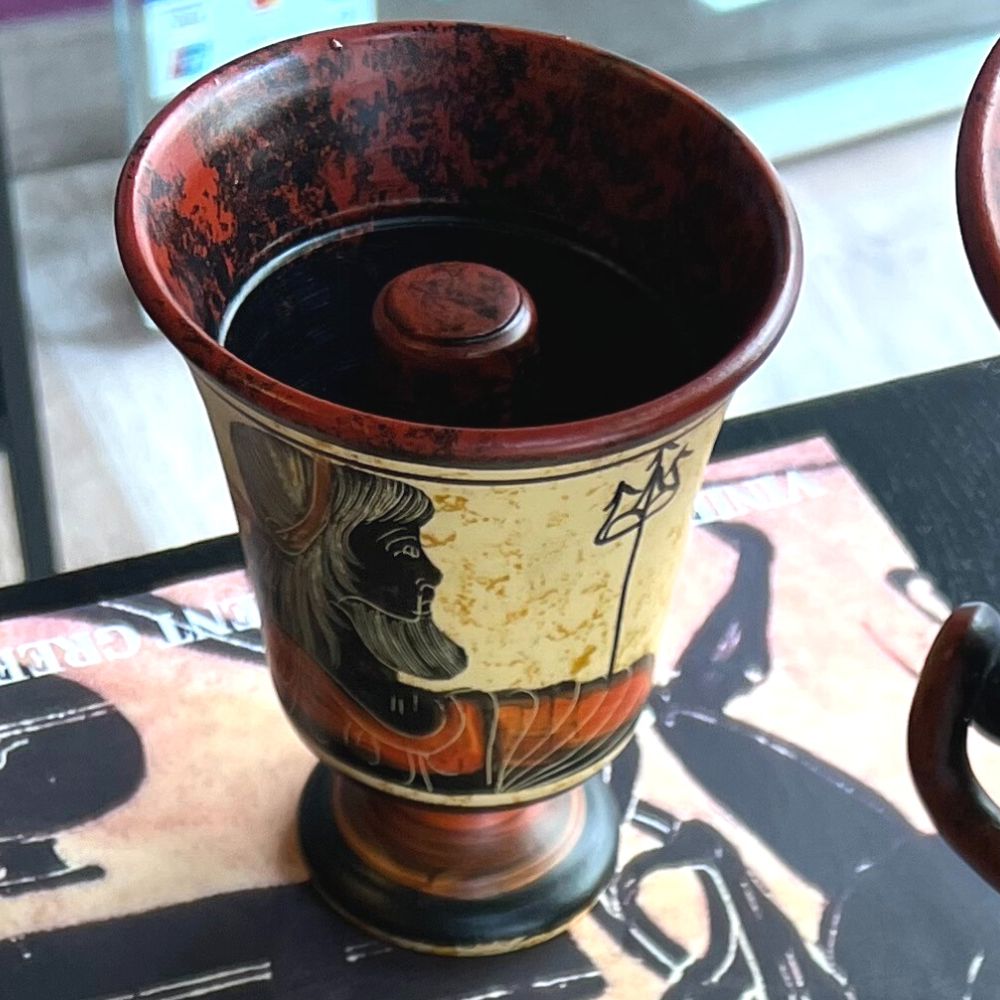 The “cup of Pythagoras” or “fair cup” created by the Samian philosopher, mathematician, geometer and music theorist was intended to suggest and observe the measure, “metron ariston”.

The “fair cup”, which dates from around the 6th century BC, is a masterpiece of the hydraulic technology of the ancient Greeks, but also a teaching tool. In addition to limiting the consumption of wine through a “smart glass”, Pythagoras wanted to teach his students moderation and temperance. When moderation is exceeded, “hubris” occurs, which results in punishment, “tisis”. All men ought to enjoy in moderation what is provided for them without eagerly seeking more.

How it works: There is a line engraved on the inside, which defines the quantity of wine. If the user does not exceed the line, then he can enjoy his “drink”. However, it only takes one more drop to go over the line and then the cup will empty, spilling all the wine from its base.

Its mechanism: In the center of the cup there is a column that is placed over a tube that leads to the bottom of the cup. As the cup fills up, the wine level inside the central column also rises. As long as the liquid does not rise above the demarcated line, there is no problem. However, as soon as the liquid exceeds the line, the particles are drawn into each other, resulting in the emptying of the cup. Pythagoras’ construction follows the law developed by Pascal centuries later for communicating vessels

large vessel in which wine and water were mixed. 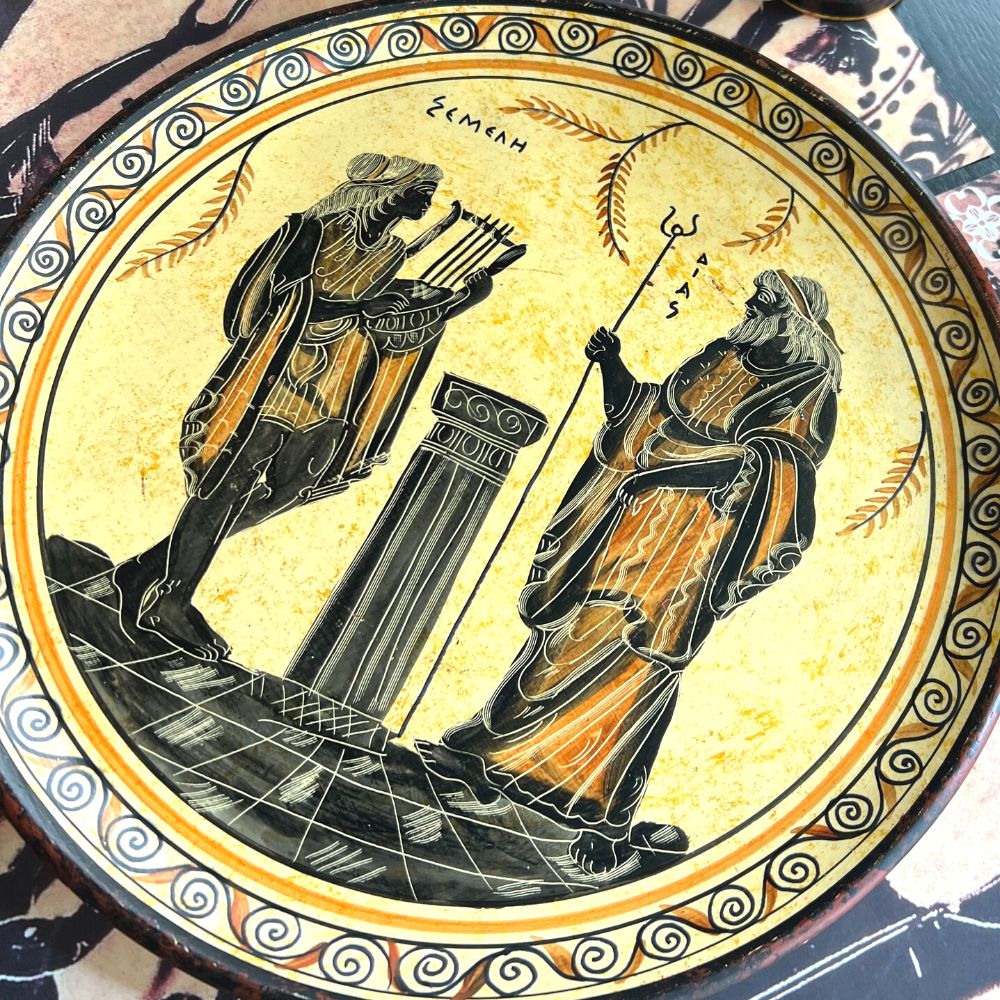 A type of dish for eating.

The ancient Greeks rarely used knives and forks at their tables.

When food was watery, they used spoons that they called “mostra” or “glossa”. A piece of bread crust, called a mystilli, could also be used as a spoon. The ancients usually took food with their fingers, which they later cleaned with a special dough or bread crumbs, since they did not use napkins. Water, wine, as well as the kykeon, were drunk in kylix (cups), which were usually made of clay. They often used wooden or metal cups, while in rich banquets one could see silver or gold cups. The food dishes were called pinakia and the smaller dishes were called ‘batania’.

A large vessel for storing wine, oil and small fruits. It had two handles. For storing oil, cereals and fruit, a large, undecorated vessel called a pithos (pithari) was also used. Also used for storing wine was a large vessel with a narrow base which became bigger while going upwards. It was called a stamnos (stamna). 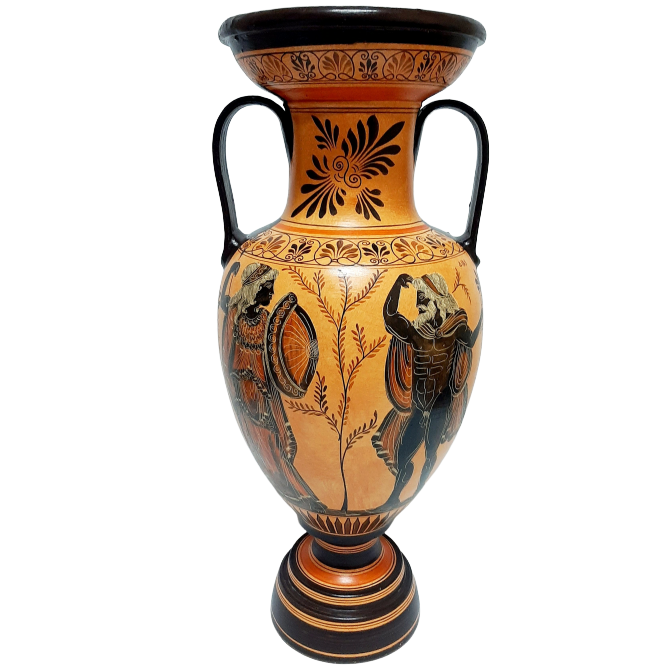 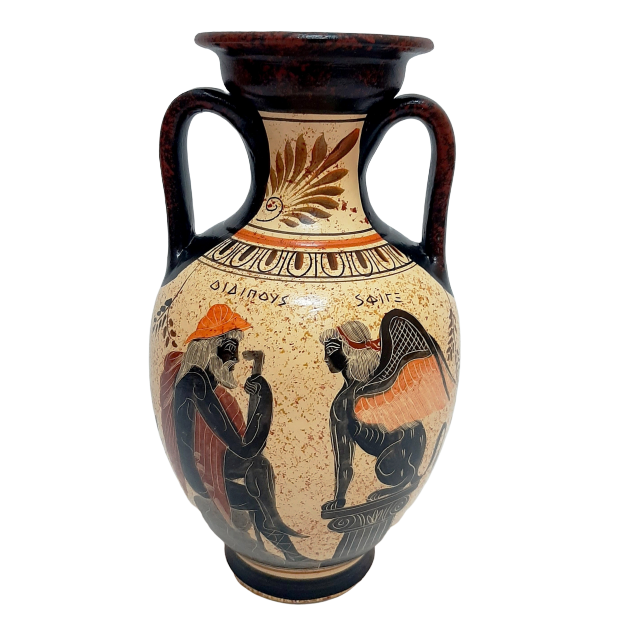 Storage vessel, variant of the amphora. It first appeared around 520 BC with the Attic technique. The name peliki has been given by archaeologists. In antiquity it had various names, such as kylix or lecanis.

A vessel for storing and transporting water. It usually had three handles. Two for carrying and the third for serving. It was also used as a ballot box and as an urn. 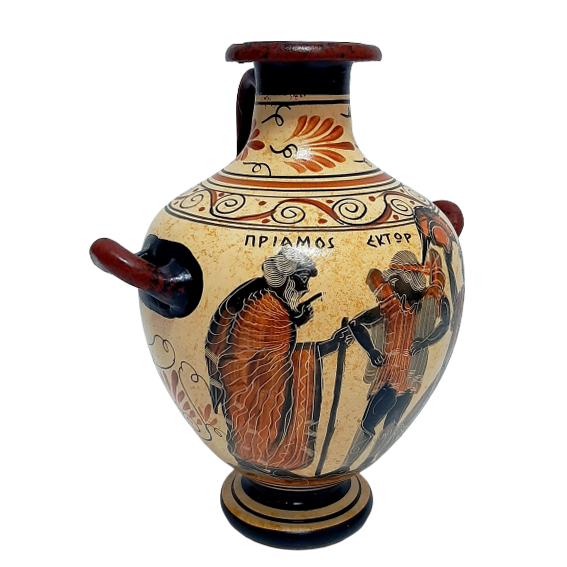 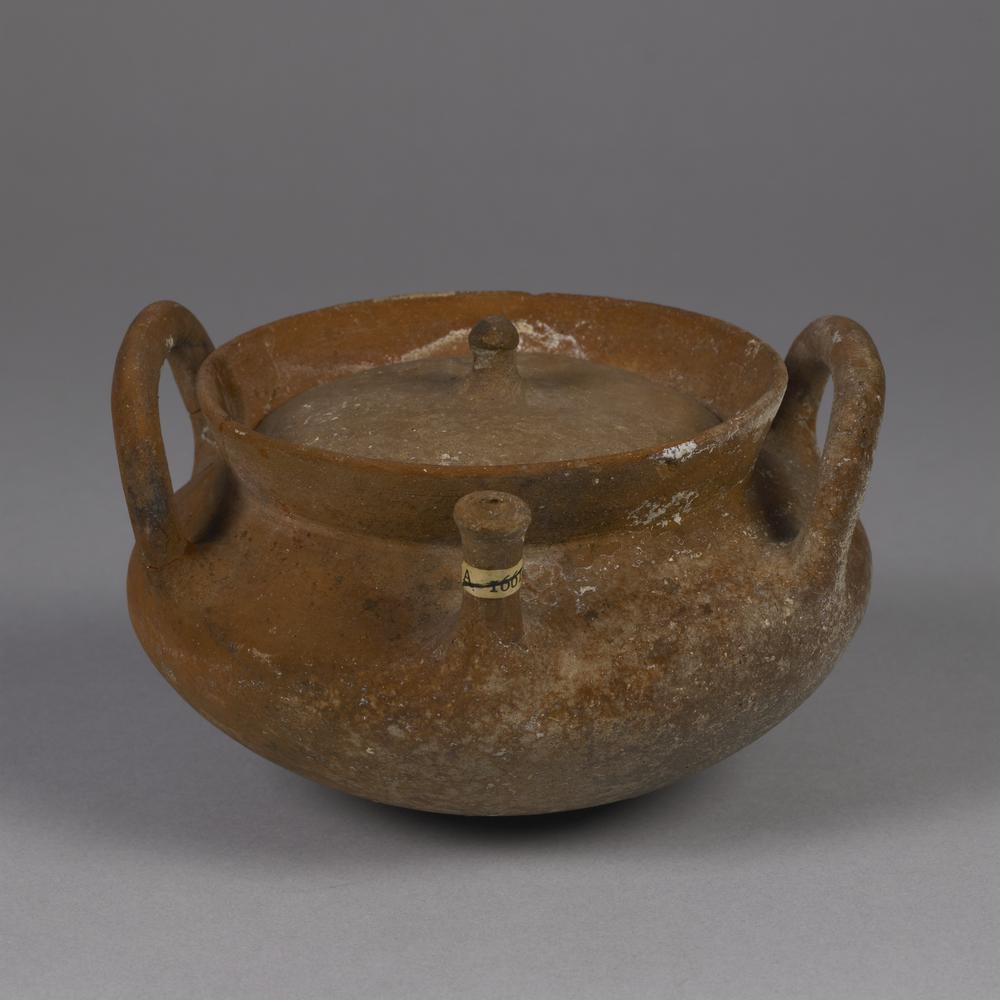 A relatively low ceramic utensil, without handles, which also had a lid. It resembled a low pot, similar to a kettle, but larger in size. The diameter of the utensil was about 20 cm, it was deeper than the kettle and had two handles. The lid had a spout to let the steam out. The larger vessels of this type had three legs, while some smaller ones were adapted to be placed in a portable mangali or fufu (a vessel with ventilation holes in the walls and a large opening to allow wood or coals to be inserted).

Very widespread at the time. The first metal pans were used in Mesopotamia and have not undergone many changes since then. That is, it is a wide and shallow utensil with a long handle, so that the person using it does not get burned by the fire. There were, of course, ceramic pans, which cost less money. It is very interesting that a similar ceramic utensil has been found in an excavation in Mycenae, but it is flat on one side and dotted with dents on the other. Archaeologist Dr Julie Hruby, who specialises in the Mycenaean diet, was very puzzled by this utensil. Together with her students, she reconstructed it and tried to bake bread on it. She noticed that the bread dough stuck to the flat surface, whereas when she used the side with the holes, the dough did not stick and was easier to bake. Thus, she believes that the Mycenaeans had invented the first non-stick pan in history. 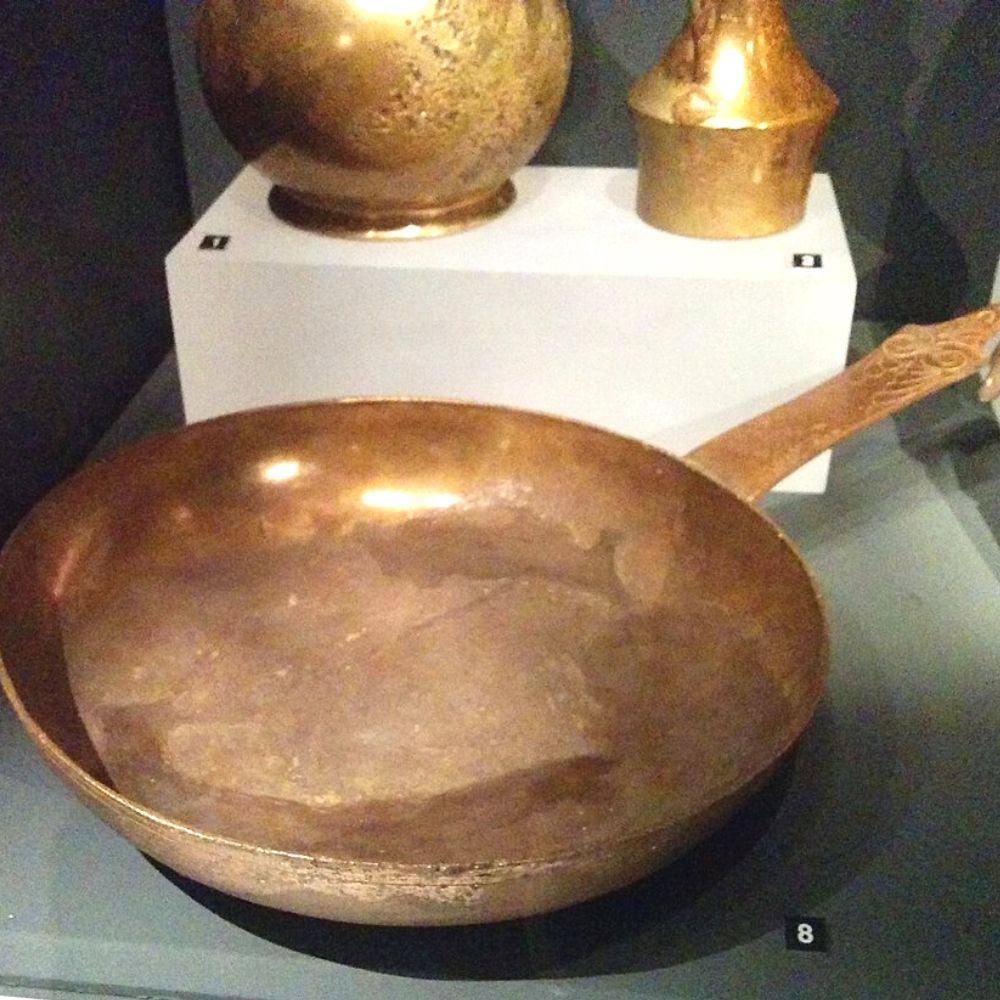 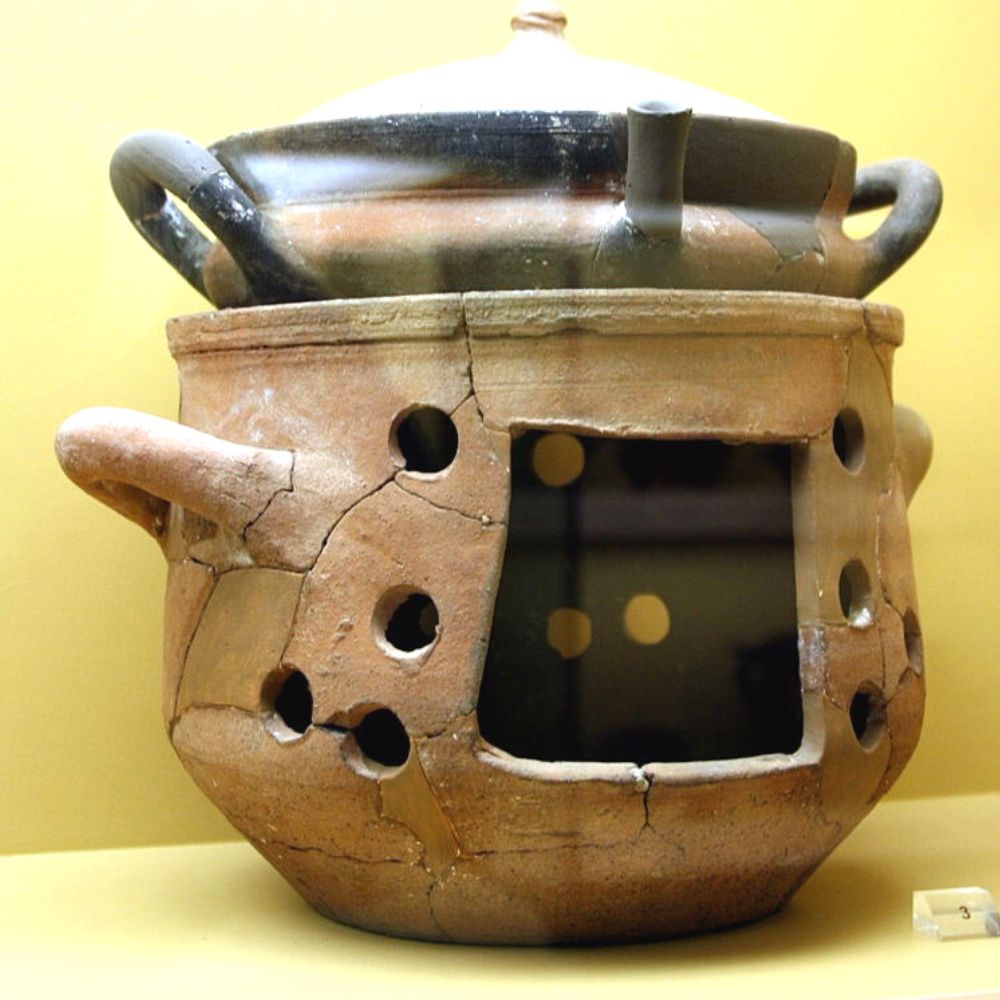 A double-walled, large, 40 cm high, double-walled kettle with a capacity of about 20 litres. It consists of an inner vessel, which fits into a larger one. The walls have two rows of holes in them, so that, when placed on the fire, the air can circulate and the fire can be rekindled.  This utensil is considered high-tech for its time and the first surviving pressure cooker.